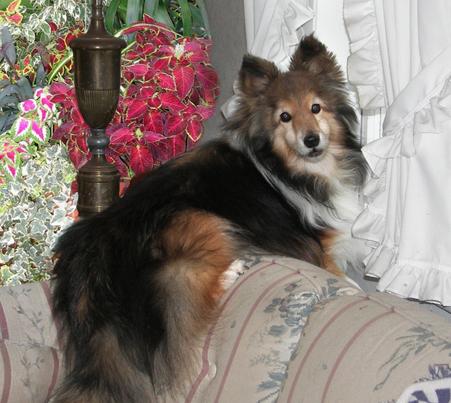 This is the story of a small Sheltie puppy, born with a disability, that fought to keep going and everyday wakes up thrilled to be alive.

Buddy and his four large brothers and one sister came into this world on the 13th of March, 1999, by way of a C-section at the vet’s office.  That afternoon Mom and all six Sheltie babies came home to their nest in our kitchen.

By the second day one little guy seemed to be pushed away and not getting his share of Mom’s milk.  He was so small that you could hold him in the palm of your hand. He weighed only five ounces. The other pups were thriving and growing like gangbusters.  I immediately started tube feeding the little guy hoping to give him a boost to help catch up. He did not lose weight but did not gain and did not seem to be able to nurse.  I continued to supplement him around the clock as I was determined not to lose him and he was also determined not to let go.  By a week of age he was still not nursing; he’d try but get pushed away.  Buddy and I were bonding already.  When I came down for the two am feeding I would say, “how’s it going Bud.”  He knew when I was there and I would talk to him while feeding.  He could not see, as his eyes were still closed and his ears shut tight, so he had no hearing yet.  But he could sense my presence.   I continued middle of the night feedings and coming home from work at lunchtime to feed him. In a little over a week I looked him over really well and there was his cleft pallet staring out at me.  It was just a small crack in the pallet and I thought it might be possible to repair it

I could not put him to sleep, he was tough and trying so hard to keep up. He would plow right through those big puppies and pig pile with them.  He has always thought he was a big dog and still does.  After this horrendous discovery I called my vet and asked if this could be repaired.  I have a pretty exceptional vet and his response was, lets give it a shot and so we did.  At fourteen days of age Buddy underwent the first of many surgeries.  He had surgery in the morning and was home by early evening.  He had to be isolated from the others and his Mom so that he would not try to nurse.  We set up a little incubator next to the whelping box.  Two days after surgery you would never have known what he had been through. He bounced back so fast. It was difficult for the repairs to the pallet to hold.  At four weeks Buddy was able to eat on his own for about a week.  This gave him a real boost and he started gaining.  The repair was continuing to weaken.  The cleft was opening up again, the stitching pulled apart.  We went back to tube feeding and bottle feeding around the clock. He was gaining weekly now and becoming very agile.  He would run the rail in the whelping box as if it was a dog walk in agility.  Maybe some day he could be an agility dog.  He was thriving, his coat becoming furry and soft, still very tiny, but extremely active and alert.

By three months Buddy had his seventh and most extensive surgery.  It was the first time he had to spend the night at the vets.  It seemed an eternity to me. I was so worried about his being away. Would they try to feed him? What if he aspirated food? At this point he was eating from a large syringe in the corner of his mouth. I used a mixture of baby cereal and pureed dog food.  The soft pallet was now completely repaired.  One more surgery to repair the small space between the soft and hard pallet.  Buddy was four months old when he had his last surgery.  It did not hold like we had hoped for. The stitching pulled away almost immediately.  Buddy was not able to eat on his own.

I had made a commitment to him at a few days of age and even if I had to hand feed him for the rest of his life, that is what I would do.  I had promised him that I would not give up on him.  I just had to look into those soft brown eyes and knew it was the right thing to do.

Buddy at six months of age has the most wonderful personality, loves everyone and every morning says lookout world, here I come.  He is so full of life and has endless energy.  He looks like a normal little Sheltie, beautiful full red coat and pretty face. That special inquiring looks in his eyes, truly understanding what you are saying.

The most surprising thing about this little dog is that he has learned to compensate for his disability.  He stands for me and puts his head up so that the food will just go down as he swallows.  In the morning I make oatmeal for him and drop it into his mouth from my finger. With his head up the food does not get into the openings in the roof of his mouth.  He also taught himself to drink.  He puts his head down into the water bowl, sucks up some water and then lifts his head straight up and swallows.  If you have watched birds drink, it is exactly how Buddy drinks.

It has been amazing to watch the development of his positive life-loving attitude. When times are hard for him, maybe a seizure because he is not well hydrated, he will look for you and just want to be held.  When the seizure is over he gets up and goes on as if nothing happened.  When he gets a piece of food up into the hole in the roof of his mouth he will sneeze it out.  Occasionally, I will have to go into his mouth after a piece of tissue or paper he has tried to chew.  He tries so hard to be a normal dog, he chews on toys, chases a ball, and has even earned his Canine Good Citizen certificate.

I have learned so much from him.  He can be so stoic when there is pain or food stuck.

Never a whimper, he just comes to you for help and when you have helped him he wags his tail so fast and runs circles around you.  His favorite expression of joy and happiness is running big circles.  I have learned that commitments are important, I could not have let him down, he tried so hard to stay alive, he deserved to live. He finds joy in every day and that is how I try to live. There is so much joy in each day, you just have to look a little and it is often in the form of a fuzzy little sheltie wagging his tail, with sparkling eyes.